SINGAPORE, 16 November 2022 – SpeQtral, a Singapore-based Quantum Communications company, today announced the launch of Southeast Asia’s first Quantum Networks Experience Centre (“QNEX”) in partnership with Toshiba Digital Solutions Corporation (“Toshiba”). QNEX is a collaborative technology showcase that will be open to strategic partners including government agencies and private enterprises, such as banks, telcos, and data centres. It will serve as a platform to explore and prototype commercial Quantum Cryptographic use cases based on Quantum Key Distribution (“QKD”). QKD leverages the laws of quantum physics to create ‘un- hackable’ encryption keys, that will enhance the resilience of communications infrastructure against existing and future cyber-attacks, including attacks fronted by Quantum Computers. 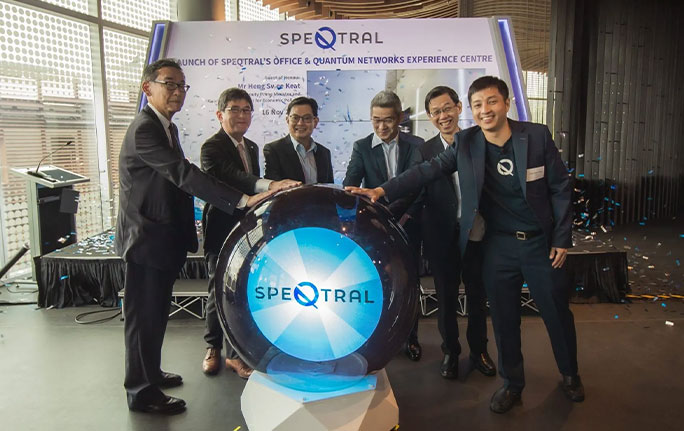 Following the partnership inked between SpeQtral and Toshiba last year, the launch of QNEX signals the intent and ambition of both companies to actively promote the adoption of quantum- secure communication in Singapore and Southeast Asia. Housed in SpeQtral’s offices, the QNEX is expected to be incorporated as a network node within Singapore’s National Quantum-Safe Network (“NQSN”), a testbed launched as an initiative of the Quantum Engineering Programme for nationwide trials of quantum-safe communication technologies that aims to enhance network security for critical infrastructure and organisations handling sensitive data. QNEX partners will be able to tap on state-of-the-art hardware, software, and combined expertise of SpeQtral and Toshiba to understand the operational issues of deploying QKD systems for various commercial use cases.

Deputy Prime Minister Heng, who is also Chairman of the National Research Foundation, said, “Over the last two decades, Singapore has invested in and built up capabilities in quantum technologies. In the coming years, as the use of digital technologies becomes more pervasive, the ability to safeguard and exchange data securely across the world will be even more critical. We will continue to invest in the National Quantum-Safe Network, a national research programme that aims to advance quantum-safe communications and develop use cases. At the same time, we are building local and international partnerships. This latest collaboration between SpeQtral and Toshiba brings together the expertise of both parties to enhance the resilience of global and regional communications networks.”

His Excellency Hiroshi Ishikawa commented, “Japan has initiated a new national strategy for quantum technology to create growth opportunities and social transformation including solving social issues. Singapore, in particular, is one of the global Innovation Hub. We are proud that SpeQtral and Toshiba will combine Singapore and Japan technologies to build a quantum- secured communication network to deal with security threats. The Japanese government will continue to provide the necessary support to strengthen the Japan-Singapore relationship.” 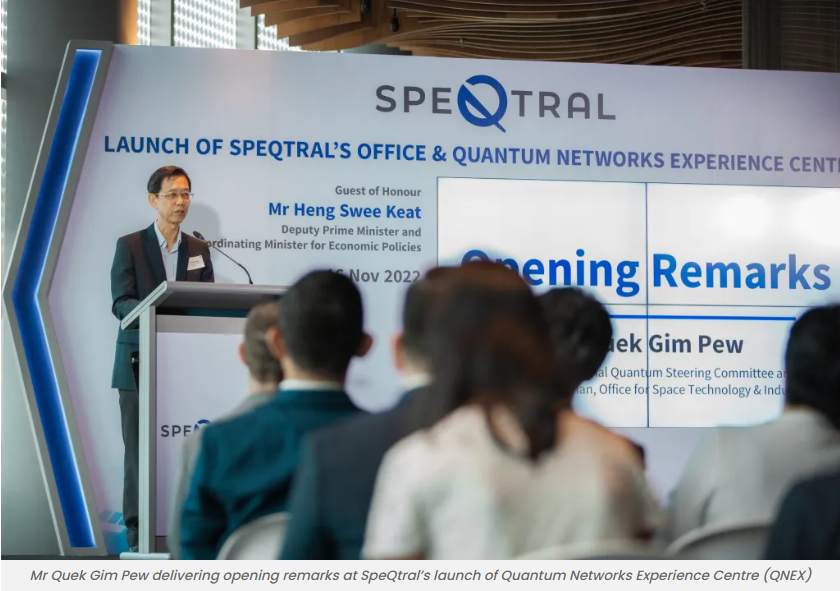 In his opening address, Mr. Quek Gim Pew said, “Ensuring trust in our digital infrastructure is vital for the modern digital economy. Quantum Cryptographic technologies are becoming increasingly important to help secure sovereign communication systems, financial services networks, and physical infrastructure against future advances in quantum and classical computing technologies. Quantum physics is a key research pillar under Singapore’s national R&D plans, and I’m glad that SpeQtral is leading the charge in translating this research into commercial activity. I am also excited to see SpeQtral working with both local and international partners to develop quantum solutions and helping organisations to future-proof their communications infrastructure. On a national level, QNEX is an integral part of the NQSN, which is being hosted by the National University of Singapore. I look forward to working with both SpeQtral and the NQSN team to support the adoption of this technology in Singapore.” 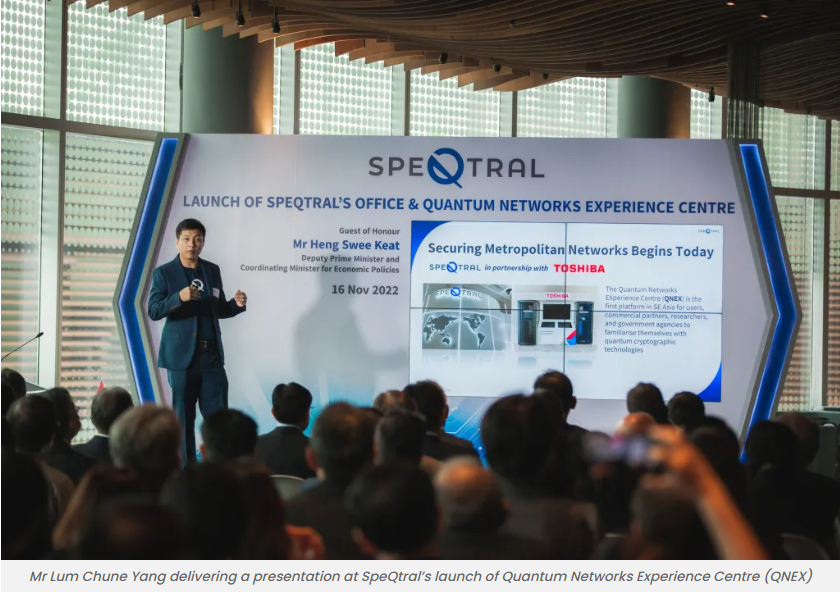 Lum Chune Yang, CEO, SpeQtral, said, “Secure communications are foundational to establishing the complex “web of trust” between buyers, sellers, and intermediaries in the modern digital economy. With this web under threat given advances in both traditional and quantum computing technologies, organisations will have to fundamentally change how they secure their most sensitive data. SpeQtral is on a mission to leverage advances in quantum cryptography and satellite technologies to build the world’s first global quantum-safe communication network.

“We can only do this through partnerships. QNEX represents both Toshiba and SpeQtral’s commitment to support the awareness and adoption of the technology in Singapore and the broader Southeast Asian region. We are also excited that QNEX will allow us to tap on the NQSN and its ecosystem partners such as Amazon Web Services, as well as other local industry partners like SPTel, a joint venture company of ST Engineering and SP Group, and DBS Bank’sInnovation Group, to identify use cases and develop applications that could support future commercialisation.” 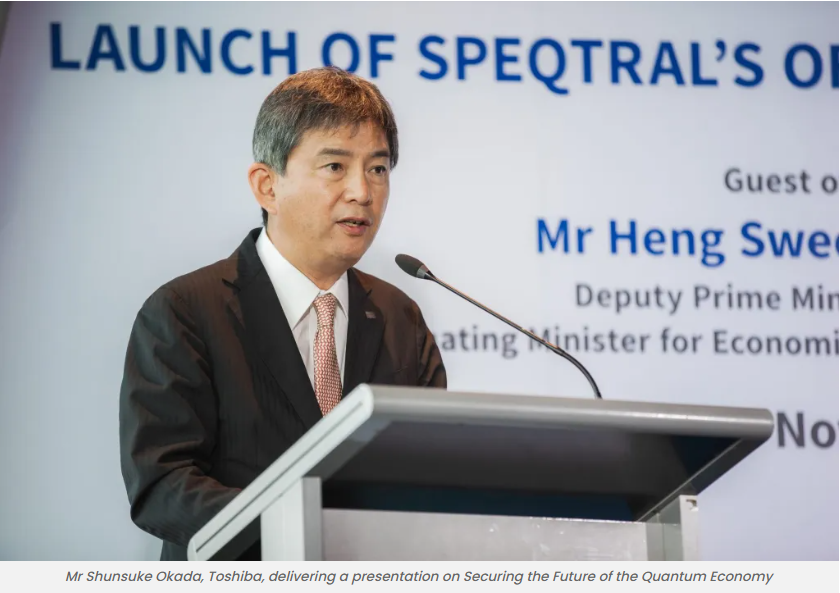 Shunsuke Okada, President & CEO, Toshiba Digital Solutions Corporation, commented, “QNEX is an important initiative that aims to raise awareness and understanding among governments and businesses in the region around how quantum cryptographic solutions can safeguard sensitive data and vulnerable infrastructures against present and future threats. We are happy to be part of this important initiative and look forward to working alongside SpeQtral togrow the QNEX partnership network in Singapore and the Southeast Asia region.”

Nimish Panchmatia, Chief Data & Transformation Officer, DBS Bank, said, “Staying ahead of competition as a digital bank, DBS has been experimenting with emerging technologies such as 5G, IoT, metaverse and DeFi. As we continue to accelerate our digitalisation agenda, we are excited to leverage Southeast Asia’s first Quantum Networks Experience Centre by SpeQtral. We believe it will be instrumental to drive greater learning and discussions around quantum cryptographic technologies in enhancing security especially around data in transit as cyber- attacks become more sophisticated. We also look forward to exploring its applicability within the financial industry as our reliance on data and data interoperability becomes more pervasive.”

About SpeQtral
SpeQtral is a pioneer in quantum communications, with a vision to build and deploy global quantum networks. SpeQtral develops quantum-secure products and services designed to protect sovereign and enterprise telecommunication networks against classical, as well as future quantum based cyber-attacks. Combining both terrestrial and space-based solutions, SpeQtral aims to secure the world’s networks against the threats posed by the imminent quantum revolution and drive innovation in quantum communications that will serve as the building blocks for the future quantum internet.